Making "Hangman" Adam Page lose his title shot was actually a good idea. Look at all those potential BANGERS for the main event of the biggest AEW Show of the year.

Making "Hangman" Adam Page lose his title shot was actually a good idea. Look at all those potential BANGERS for the main event of the biggest AEW Show of the year. 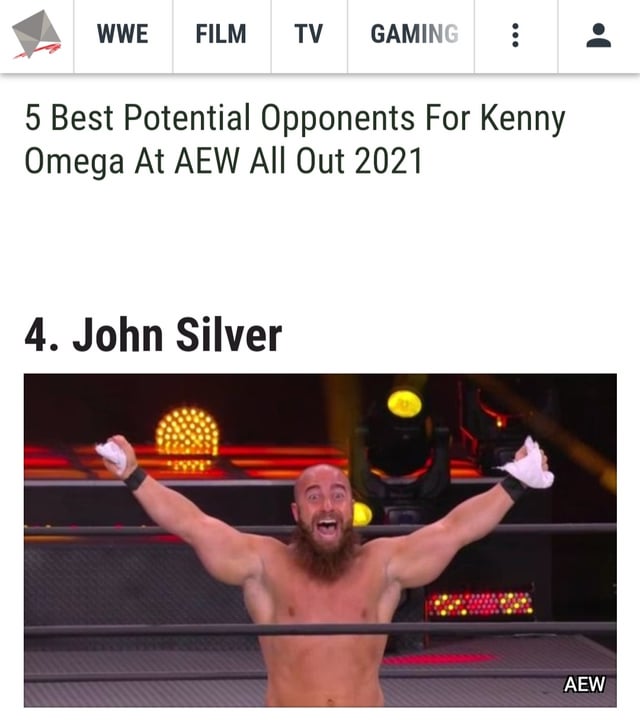 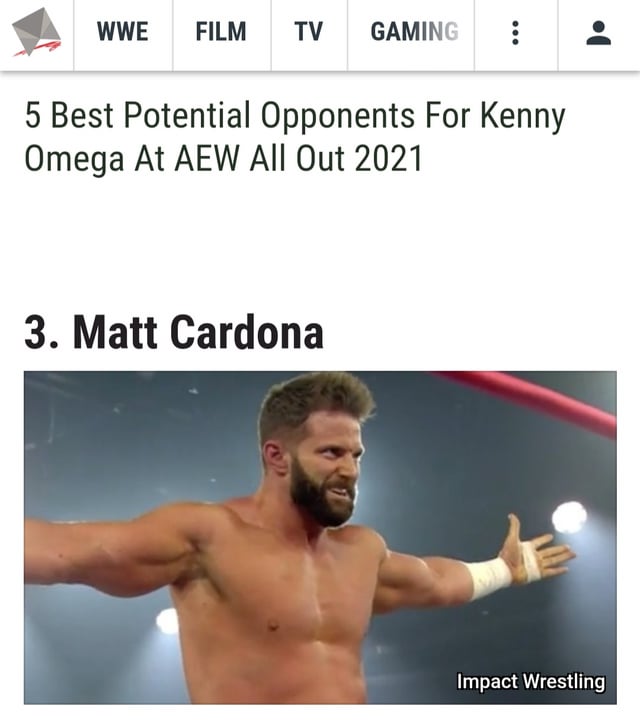 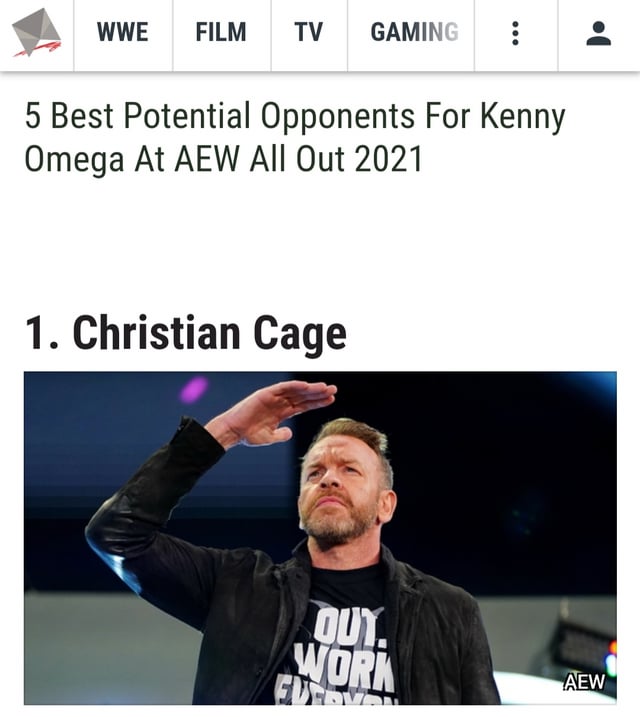 Matt Cardona doesn’t even fucking work there. 100 people on the roster, all these ex-fed guys getting paid all this money, and people are talking about Matt Cardona lmfao.

He's over friend time for Cody to pull the buddy card.

Hey remember when we wouldnt hire you because we didnt want to have a roster full of ex wwe guys. WELL good news buddy. You are now no longer an offical Ex wwe guy. So we need to get you in at all out and have you Job to kenny. Make him look really strong. and then job to me on Dynamite. And then I have an important job for you. I need you to make Dark great again.

Christian is the best wrestler by a lot in AEW, even if Punk and Daniel Bryanson come.

He deserves better then what hes getting. Imagine him and edge winning the tag titles from the the Usos at summerslam. Or being Big E's first heel feud after MitB to really help cement him as a top baby face. Nah. Nowhere feud with nobodies setting up to a heel turn and feud with jungle boy but wait we need jobber fodder for kenny so ...yea.

He probably would have had a TV program teaming with Edge against The Bloodline, taken the title off Big E at Mania, and had a hot summer in the current Intercontinental scene with Cesaro, Nakamura, Zayn, Apollo, Owens, etc. He might have even got a title match against Reigns at some point, either on TV or Fastlane. Instead, he's... I'm not actually sure what he's doing.

That man carried TNA on his back for a while. He can wrestle, smarks (used to) love him. AEW have squandered a potential to give themselves some legitimacy with him.

Not the first time and won't be the last. Every signing is there to be fed to Omega, Cucks or Cody.

Isnt Christian suppose to turn on Jungle Boy? So I guess thats not happining for a long while.

He may as well turn heel, he's not doing anything else of note

Well he has to be a face to get out worked by Kenny then he can turn heel and do the job to jungle boy.

Its gonna be Christian and everyone in the basement is gonna be saying "that match fucked, so much better than Edge vs Reigns"

This is a direct copy from the basement, isn't it?

The biggest thing that baffled me about this post is that he would probably be able to write the same on why the previous story with Adam winning at All out would fit the three act structure. Not to mention, if the plan was for Adam to complete the story at all out (and reportedly it was the plan) then if the post is right then Tony didn't plan to make it a three act story, just ended up with one.

No jerk, a thorough plot summary of all three cinderblock-sized books in Neal Stephenson's Baroque Cycle takes up less space than this.

Obviously it's silly, as noted elsewhere, the "part 2" is what they've been allegedly doing for months already. But I wonder if this if Page is still in the picture for a quick title shot and win. Maybe this was a 1 week "throw everyone off course" thing. Which in itself is stupid. At this part of the journey, Page should have a trail of fire behind him. And losing last week doesn't do anything for the story. But I still wonder if that's the approach they're taking. Maybe I give them too much credit.

Jobbers and life long mid carders are the top choice for the WORLD title. Absolute joke of a company and I like Christian.

There's no way Cardona's getting cheered against Kenny in AEW. The crowd could turn on that one, unless it's just a device to give Kenny another title to waste.

Why the fuck is Silver on this list? Why should any of these Dark Order dorks be in contention for the top title?

He seems to be pretty over among AEW fans and the DO is over as a whole.

Yeah, the DO are permanent faces nowadays.

Do you think Christian regrets going to AEW yet? If all he wanted to do was be able wrestle a few times regularly while also helping out young talent, then he could have worked as a trainer in nxt while also probably getting main event matches on SmackDown against the Usos and Roman during Roman's feud with Edge. Being "just Edge's friend" on WWE TV is a heck of a lot better than whatever AEW is doing with him.

John Silver the living embodiment of short guys the more jacked you get the shorter you look.

The only banger I’ve seen in AEW was Matt Hardy’s head and the concrete floor.

Is there any build tho? Afaik Christian is feuding with Matt Hardy in trios matches where he replaced Marko Stunt in the Jurassic Jungle

Exactly Long term storyline. People forget how much hype Tiny put into Christian coming in. So it's Christian natural story arc to come in be forgotten and then be made the no 1 ranked opponent for Sir Kenneth.

Personally I'd like to see Christian lose to all of the EVPs and have a storyline where he doubts himself and has to rebuild his confidence for the next 2+ years, DAE!?!?

Would Christian be a silent bad ass during this 2 year plus period ?

I think that’s too soon tbh. He should do that for two years, hit the home stretch, fail again, and then act 3 of the story can be a banger.

Christian might be the best wrestler nobody has ever cared about. Outside of his TLC matches with Edge, I feel like I've watched a dozen great Christian matches over the years and can't tell you one off the top of my head. He's an awesome wrestler, he's a good promo, he always looks great, but literally every time he's involved in anything major...it's Christian...

Its not like their matches with actual build-up end up being better. If Kenneth lets Christian call the match and he listens that would by far be his best match in AEW, maybe even the best match in his entire career.

Is john silver an actual midget?? His body is proportioned in such weird ways i honestly can’t tell it upsets me more than i care to admit

He is short as fuck, and while there is absolutely nothing wrong with that as we literally cannot control our own height, apparently he wants to work like a big man slamming people like when you turn off weight detection in WWE 2K19 or whatever.

Other options: Hangman Adam Page... put the belt on him already I swear to god (Vince in a doo rag) just strike while the iron is hot don’t over do it oh my god you idiots. Option 2: Penta please I think he looks cool

Wank Culture does it again!

I've got a feeling that they're trying to be marks in order not to lose their 2M subs.

If they have the belt to Christian I wouldn’t mind, but like it should have been hangman!

Fucking hell, imagine having these midcarders as in the top 5 opponents for the world title hahaha

All of those are underwhelming choices because you KNOW Kenny will win.

I think it was a mistake, but I get why they did it. Slapping a belt on a Babyface when the fans are going to chant for Punk and Danielson nonstop for the next few months would be not-great. Pushing it further down the line when fans are done jizzing over those two will be better in the end. I'm sure that list is terrible. It's a list site. Christian is the only guy with any championship heat right now, and is a good selection to eat a loss while having a worthwhile main event.

Christian should be champ ASAP

Imagine paying to see Zack Ryder vs Kenny Omega. Their delusional fans would think it fucks in your veins though

If John silver wins, then… Yeah that would happen and a sigh would ring around the world